So last night I attempted to master the “Toll House Chocolate Chip Recipe” … I decided to BRAG a bit after I finally attained measurably the most yummiest attempt yet. One must also remember I am admittedly not the best COOK or the BAKER in the Family!

HA! But they really were and I am so proud of myself I can hardly contain it!

Can you tell we love shows like ” The American Baking Competition” … and yes, we just heard yet another show has been cancelled because of allegations of misconduct… GEEZ!

So, I decided to share some common facts of such an age old recipe developed by the owner of the Toll House Inn in Whitman, Massachusetts.  Just think about it. What if Ruth Graves never shared with the world such a wonderfully delicious feat. Let’s give this lovely woman credit where credit deserves!

The chocolate chip cookie was invented by the American chef Ruth Graves Wakefield and chef Sue Brides in 1938.[1] She invented the recipe during the period when she owned the Toll House Inn, in Whitman, Massachusetts. In this era, the Toll House Inn was a popular restaurant that featured home cooking. It is often incorrectly reported that she accidentally developed the cookie, and that she expected the chocolate chunks would melt, making chocolate cookies. In fact, she stated that she deliberately invented the cookie. She said, “We had been serving a thin butterscotch nut cookie with ice cream. Everybody seemed to love it, but I was trying to give them something different. So I came up with Toll House cookie.”[2] She added chopped up bits from a Nestlé semi-sweet chocolate bar into a cookie.[3] The original recipe in Toll House Tried and True Recipes [4] is called “Toll House Chocolate Crunch Cookies.” (WIKIPEDIA)

History in the making. A simple Chocolate Chip Cookie.

Wakefield’s cookbook, Toll House Tried and True Recipes, was first published in 1936 by M. Barrows & Company, New York. The 1938 edition of the cookbook was the first to include the recipe “Toll House Chocolate Crunch Cookie” which rapidly became a favorite cookie in American homes.[2]

During WWII, soldiers from Massachusetts who were stationed overseas shared the cookies they received in care packages from back home with soldiers from other parts of the United States. Soon, hundreds of soldiers were writing home asking their families to send them some Toll House cookies, and Wakefield was soon inundated with letters from around the world requesting her recipe. Thus began the nationwide craze for the chocolate chip cookie.[5][6] The recipe for chocolate chip cookies was brought to the UK in 1956, with Maryland Cookies one of the UK’s best selling chocolate chip cookies.[7] (Yup … straight from Wikipedia) NOT FAKE NEWS! 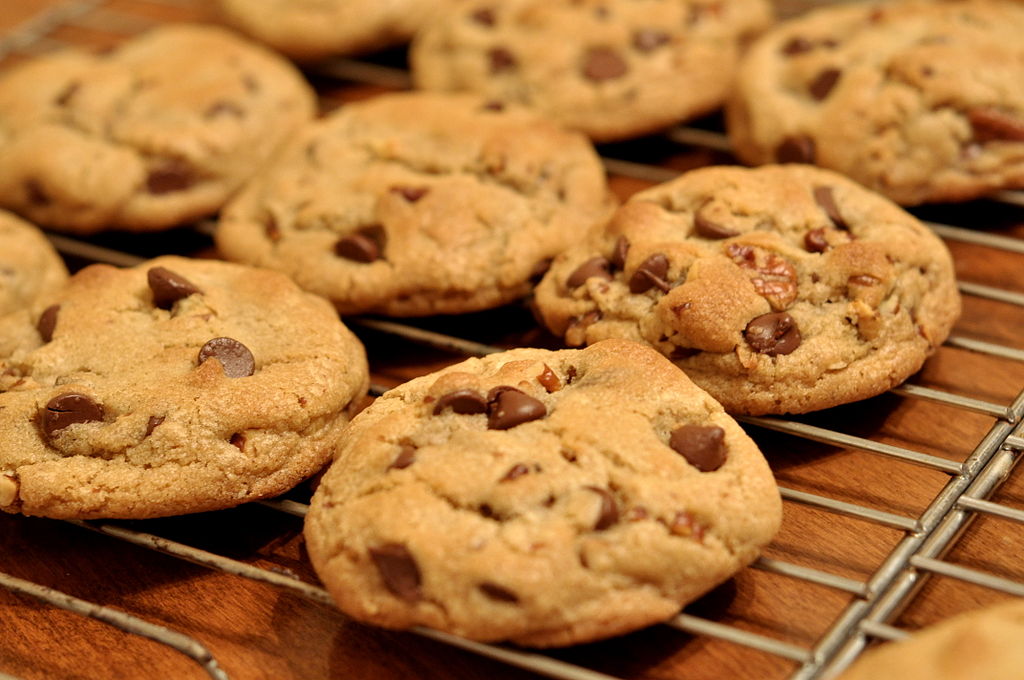 The Recipe of the most iconic Chocolate Chip Cookie we used:

BAKE for 9 to 11 minutes or until golden brown. Cool on baking sheets for 2 minutes; remove to wire racks to cool completely.

SLICE AND BAKE COOKIE VARIATION:
PREPARE dough as above. Divide in half; wrap in waxed paper. Refrigerate for 1 hour or until firm. Shape each half into 15-inch log; wrap in wax paper. Refrigerate for 30 minutes.* Preheat oven to 375° F. Cut into 1/2-inch-thick slices; place on ungreased baking sheets. Bake for 8 to 10 minutes or until golden brown. Cool on baking sheets for 2 minutes; remove to wire racks to cool completely. Makes about 5 dozen cookies.

* May be stored in refrigerator for up to 1 week or in freezer for up to 8 weeks.

FOR HIGH ALTITUDE BAKING (5,200 feet): Increase flour to 2 1/2 cups. Add 2 teaspoons water with flour and reduce both granulated sugar and brown sugar to 2/3 cup each. Bake drop cookies for 8 to 10 minutes and pan cookie for 17 to 19 minutes.

SHARE with us your Feats in the Kitchen!! Have FUN!! SLAY the DAY!
– SO SOUTHERN AT HEART