WE DANCE. Leave it to the NFL to have the best spot! 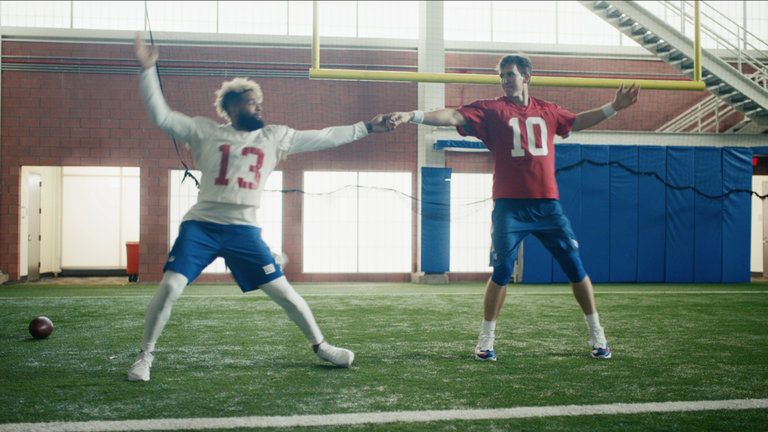 Eli Manning is a beautiful, big, football-playing wet sock. Everyone knows who he is, but be honest — did you truly have any strong opinion about him before this moment? He has won two rings, but his best Super Bowl performance may have come on Sunday, thanks to this beautiful NFL advertising spot with Odell Beckham Jr.

Please, Eli. Why did you wait for 37 years of your life to show us your incredible dancing skills? Or your amazing Dirty Dancing parody ability?

Everyone loved this commercial. How could you not?

It took all summer for the big finale to come together in the movie “Dirty Dancing.” Eli Manning and Odell Beckham Jr. learned the routine in two days.

In a National Football League ad that quickly went viral, the Giants’ quarterback and wide receiver recreated that film’s final scene with some help from a Broadway choreographer. With its potent mix of comedy, pop-culture nostalgia and sympathy for a quarterback who had a rough season, the ad captured the imagination of fans.

The advertisement, created by the agency Grey New York, was in a way a celebration of celebrations. The 2017-18 season was the first since the N.F.L. lifted its ban on dancing after touchdowns, and all season, teams outdid each other with entertaining routines in the end zones. One team mimicked playing hide-and-seek using the goal post. Others got in formation for leapfrog and duck-duck-goose. There were pretend naps — and versions of the popular dance move, the Floss.

“We had so many breakout moments where players showed their creativity together,” said Dawn Hudson, the chief marketing officer of the N.F.L. “We wanted to keep that fun going for the Super Bowl and give our fans something to smile and laugh at.”