Is it time? Is it time for you to roll out that mat? We think so! It’s time to roll out your yoga mat and discover the combination of physical and mental exercises that for thousands of years have hooked yoga practitioners around the globe. The beauty of yoga is that you don’t have to be a yogi or yogini to reap the benefits. Whether you are young or old, overweight or fit, yoga has the power to calm the mind and strengthen the body. Don’t be intimidated by yoga terminology, fancy yoga studios and complicated poses. Yoga is for everyone.

We decided to hit the mats at a local place up the street. Why? My husband recently had surgery to his ankle and after months of rehab and stretching it’s still taking it’s sweet time to heal. You know us! Any time to get in a workout and we are there!

Is hot yoga good for you?

Yoga can be traced back to ancient India, and though research is limited, studies suggest it is safe for most people and may have multiple benefits, including easing chronic low-back pain and improving some heart disease risk factors. But even less is known about hot yoga, a more recent form of the mind-body practice. Hot yoga is performed in a room heated to between 80 degrees and 105 degrees Fahrenheit and may be more physically rigorous than regular yoga, making practitioners susceptible to dehydration and muscle injuries, said Casey Mace, an assistant professor of public health at Central Washington University in Ellensburg, Wash.

“People may assume the warnings and benefits and possible risks are the same for all types of yoga, and that’s simply not true,” said Dr. Mace, who has studied hot yoga. Her research found that hot yoga practitioners reported benefits like greater flexibility and improvements in mood, fitness and stamina, but that over half had experienced dizziness, lightheadedness, nausea or dehydration.

“There may be a misconception that these feelings are normal, but they’re not,” she said. “If people are feeling dizzy or have headaches or feel weak or fatigued, it may be related to fluid loss. They should take a break, cool down and get hydrated. Proper hydration is key.”

Still, Dr. Mace said, “Hot yoga is generally safe, and the side effects we’re seeing are generally mild,” though as with any kind of yoga, the practice does have risks. Doctors in Chicago reported this summer on a case involving a healthy 35-year-old woman who went into cardiac arrest induced by heat stroke during a hot yoga class. The woman survived.

Muscle and joint injuries may be more common with hot yoga because the heat makes people feel more limber than they actually are, and they may overdo it, but data on injuries is also limited, said Carol Ewing Garber, a professor of movement science and kinesiology at Teachers College, Columbia University, and past president of American College of Sports Medicine. “You have to be a bit cautious when you look at studies, because they are conducted with high-quality, well-trained yoga teachers under the best of circumstances,” Dr. Garber said. “The reality is that out in the real world, there is a lot of variability across instructors in terms of their training.”

Research on one form of hot yoga, Bikram yoga, suggests it improves balance, lower body strength and range of motion for both the upper and lower body, and might even help improve arterial stiffness and metabolic measures like glucose tolerance and cholesterol levels, as well as bone density and perceived stress. But the Australian researchers who reviewed the literature — including one who is a co-owner of a Bikram yoga studio — noted that only one randomized controlled trial, the kind considered the gold standard in medicine, had been conducted, and that most studies did not track adverse events and included only healthy adults.

If you have low blood pressure or a pre-existing health condition, consult with a doctor before trying hot yoga. If you have adverse reactions to heat, are prone to heat stroke or dehydration or have a medical reason to avoid being in a hot tub or sauna, you may want to stick with regular yoga. If you are doing a hot yoga class, make sure you’re well hydrated by drinking a lot of water before, during and after class.

“If you’re sweating profusely, it’s very difficult to replenish that fluid,” Dr. Garber said, and many people aren’t good at “recognizing the early signs of heat illness.” These include thirst, profuse sweating, dizziness or headaches, weakness, muscle cramps and nausea or vomiting. 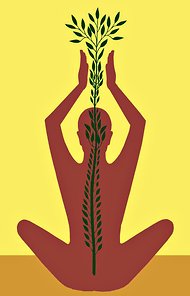 One morning, a well-meaning swimming buddy called out for all in the Y locker room to hear: “I can’t believe Jane Brody doesn’t do yoga!”

She was right: I didn’t do yoga and, not knowing what it might offer me, I was loath to try it. I also feared that the meteoric growth of yoga had outpaced the training of quality teachers able to protect my aging body parts.

Now, it seems, my thinking and schedule may be due for a change. After reading my colleague William J. Broad’s new book, “The Science of Yoga,” and observing a class at my local Y, I see there may be a lot more to this centuries-old activity, more to its benefits and its risks, than I had ever imagined.

And if the science recounted in this book is correct (knowing Mr. Broad, I have every reason to think it is), my creaky joints and muscles may reap some important rewards from an individualized yoga prescription. I’m especially concerned about my back, which is riddled with narrowed vertebral spaces and prone to spasms and sciatica.

Mr. Broad said decades of yoga has helped protect his back from excruciating pain initially caused by a ruptured disc. Yet in 2007, even he succumbed to a yoga-induced back injury as he was coming out of a pose called the Extended Side Angle.

“Recovery took weeks,” he wrote. “But the humbling experience gave me a deeper appreciation for yoga safety.”

Not all yoga poses are beneficial or safe for everyone, and enthusiasts are hard put to know whether the teacher and class they select are more likely to help than to hurt them.

What I need is yoga therapy, and I can only hope to benefit from it if the teacher is well-qualified. And therein lies the rub.

As I learned from Mr. Broad’s book, “the United States has no regulatory body for yoga therapy. The field is, on the whole, completely unlicensed and unregulated. There is no such thing as a Registered Yoga Therapist. Applicants for registration usually face no requirements to establish their education credentials, to pass national exams, or to show other evidence of expert proficiency. Registration, in short, bears no comparison to the rigorous world of health-care certification.”

Anyone who chooses to can hang out a shingle and call himself a yoga therapist. Licensing requirements exist for beauticians and hairdressers, but not for yoga therapists.

The Yoga Alliance, a national organization for yoga in the United States, fills in this gap with specific training standards that, if met, earn the title registered yoga teacher. The standards involve either 200 or 500 hours of instruction and supervised practice, with specialized training for children’s and prenatal yoga.

To be sure, the yoga world is rife with true believers, many of whom bombarded Mr. Broad with complaints about an article he wrote in The New York Times Magazine last month chronicling a raft of devastating yoga-induced injuries. But he was also deluged with dozens of personal injury stories that included strokes and ruptured discs.

Among them was that of a 39-year-old man who said in an e-mail that he’d “always been very active,” having “skied, boxed, climbed, surfed, etc.” The man began practicing yoga in 2000 and said he reveled in the meditative aspects of it, in contrast to his more “brutal sports.”

Then, in 2010, he enrolled in a new class and developed “severe spinal stenosis” with debilitating back spasms when the teacher “literally forced me into maintaining an extremely painful Downward Dog.” This is a classic pose in which hands and feet are flat on the floor, knees are straight (though not locked) and the body is bent at the waist at a right angle.

In a more serious injury resulting from the Downward Dog, a woman in Washington, D.C. suffered a spinal cord infarction, a blockage that caused sudden leg paralysis. She has since regained only partial use of her legs.

Mr. Broad concluded, based on his research, that the benefits of yoga “unquestionably outweigh the risks. Still, yoga makes sense only if done intelligently so as to limit the degree of personal danger.”

Thus, it is critical to choose your class and teacher carefully. Grace Grochowski, a registered yoga teacher at my local Y who has been teaching for 20 years, recommends that prospective students ask about an instructor’s formal training, tell him or her what they hope to get from the discipline, and report any injury, ache or health condition that might affect their participation.

The teacher should be willing to suggest changes in the moves you attempt or even say that the class may not be right for you.

“A good teacher listens and makes appropriate suggestions,” Ms. Grochowski said. Though her popular class is large, she regularly walks among the participants, correcting and modifying their poses and suggesting alternatives.

Most important, Randi Baker, one of her students, told me, is to “never go for the burn. If something hurts, don’t do it.”

Many of the oft-touted virtues of yoga have yet to be established in well-designed clinical trials, Mr. Broad wrote, and some popular claims have been shown to be bogus, like the belief that yoga breathing suffuses the body with extra oxygen or that it revs up metabolism and can foster weight loss. (Yoga actually slows metabolism, though its relaxing effect may reduce stress-related eating.)

Good scientific studies, including many supported by the National Center for Complementary and Alternative Medicine, an arm of the National Institutes of Health, have demonstrated that regular yoga practice can improve cardiovascular risk factors like elevated blood pressure, blood sugar, blood cholesterol and clot-inducing fibrinogen, and it can raise blood levels of protective antioxidants.

Yoga was shown to improve balance in elderly women and thus may reduce their risk of falls, a leading cause of injury-related death in older people. And, I was pleased to learn, perhaps by enhancing blood flow and the production of growth factors, yoga can counteract the deterioration of spinal discs, a plague of millions of Americans, young and old.

Possibly through its stimulation of the vagus nerve, yoga appears to counter inflammation throughout the body, and may reduce the effects of diseases like lupus and rheumatoid arthritis. And by relieving physical and mental stress, which can erode the tips of DNA, which are called telomeres and program cell death, yoga may slow biological aging and prolong life.

A more immediate benefit, to which Mr. Broad devotes an entire chapter, is yoga’s apparent ability to revitalize a person’s sex life by producing surges in sex hormones and the brain waves associated with sexual arousal. Just don’t try to act on this stimulation in class.

Let us know what is the best YOGA for you!